The PSP is a stainless steel push button panel mounted on posts, sited in a convenient location within the depot. Each point end can be moved by pressing the green buttons on the panel. The end position is then shown as a yellow LED indication. 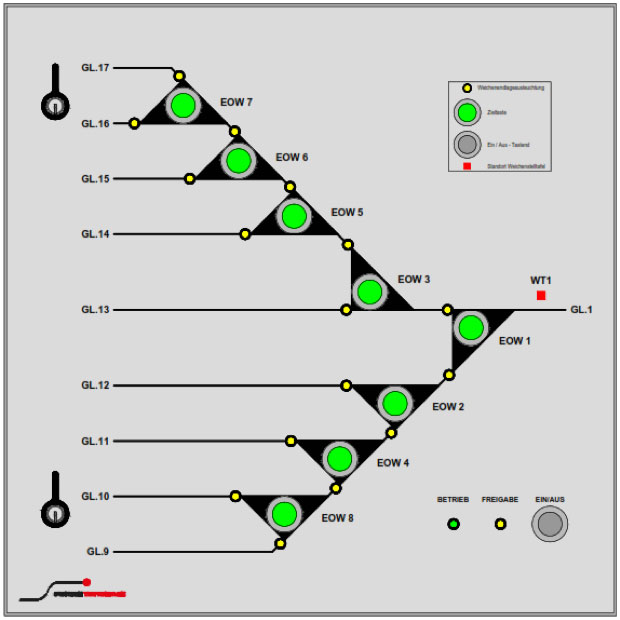 Figure 1 – Design drawing of a PSP

Typically the Tie-FenLock 200 system is installed in location cabinets. Unlike typical NR location cabinets, these are mounted on a swinging frame and therefore necessitate access from one side. The frame is made up of 2 columns of 8 19” racks (although typically only a maximum of 7 are used to allow cable bending and access in the base of the location). 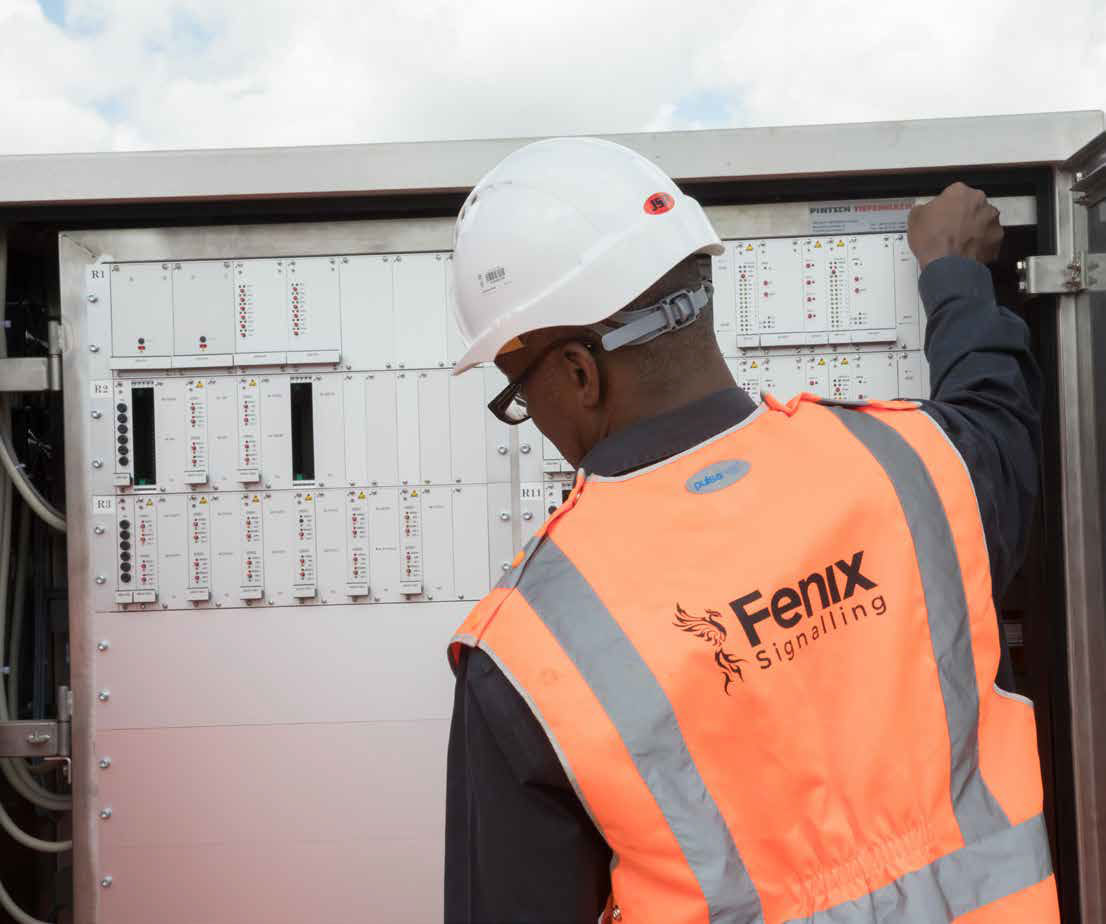 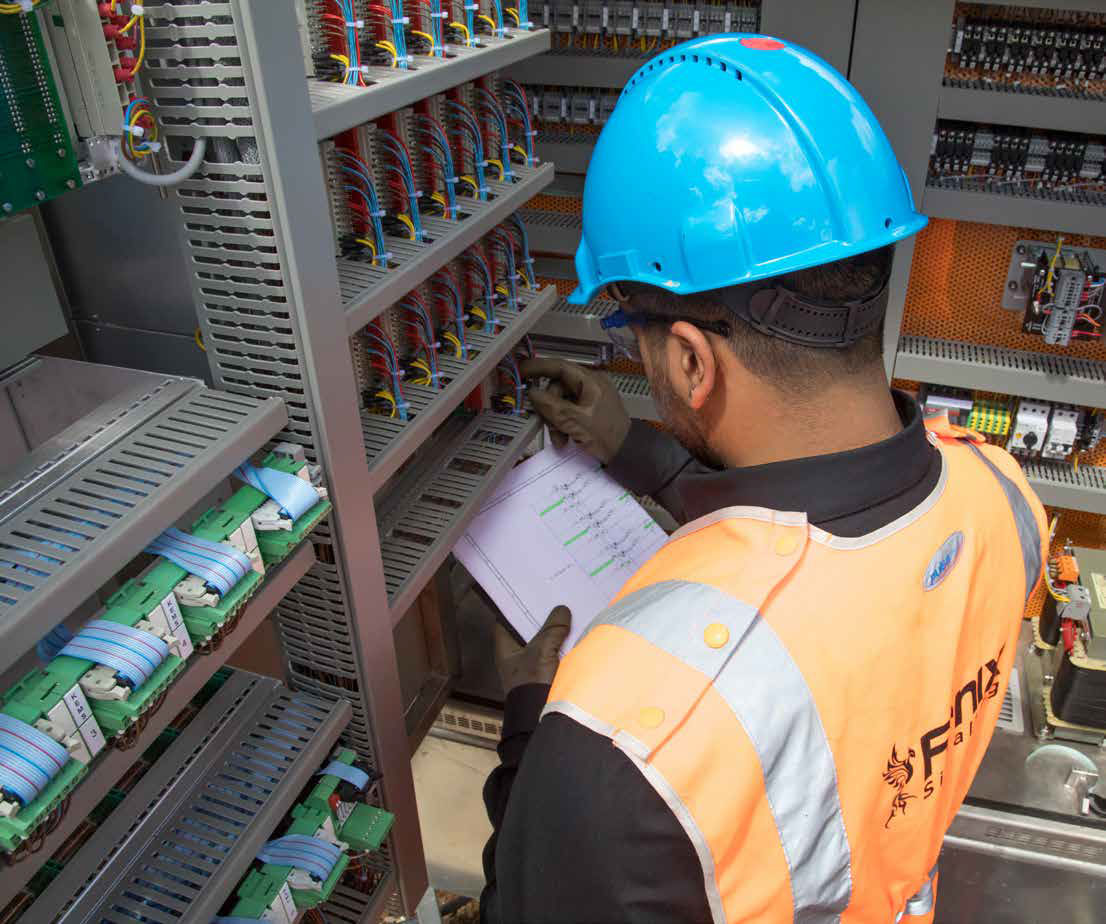 The racks are also compatible with indoor application, where a glass fronted cabinet can be mounted within a designated building or within a relocatable equipment building (REB). This is beneficial in areas where signalling equipment is densely populated.

The Tie-FenLock 200 DCS typically uses unique points position indicators to illustrate the lie of the points to the driver and a positive confirmation to the shunter that the points are correctly set.

These are typically mounted on posts near to the turnout which it is indicating. There are six lamps in total, three on each side. Only two are lit at one time, either horizontal or vertical depending on the lie of the points.

The Tie-FenLock 200 system uses trailable point machines which are robust and mounted in the four foot. The machine is normally installed in approximately 80 minutes, which is much faster than current mainline equipment.

A six-foot moving version is mounted on two cross members which clamp to the outside foot of the rail. The overall height of the machine is below the standard BS113 rail running height.

The detection and power is supplied by a single cable, with a minimum of 5 cores. The power supply is currently a three phase neutral 400Vac supply, although a 110Vac varient is in development. It is recommended that the tail cable to the point machine is armoured to prevent damage.

The points machine features an internal mechanism allowing the machine to be safely used in a trailing direction without damaging the components. The machine can be installed with a plate which allows the intergration of a standard six-foot mounted back drive. In the event of a power failure, the machine can be operated manually by inserting a key to engage manual operation and then turning a crank handle.

The machine requires minimal maintenance at an interval of every 6 months, which is limited to the exterior of the machine. This is normally to account for vibration and wear in the turnout. It includes adjustment of the detection rods and maintenance of the screw thread to prevent rusting, in addition to re-torquing the bolts.

When an over-running and/or a trailing move is detected, if safe and in combination with the axle counter system, the points automatically throw the points to the non-trailing position to prevent damage to the infrastructure/train.

The Tie-FenLock 200 requires a three phase neutral 400Vac supply to the equipment housing, location or REB where it is transformed down and/or distributed as required. The electronic components predominantly run off 12Vdc and 24Vdc.