Feltham Depot is a new railway depot on the Waterloo – Reading line in the London Borough of Hounslow, West London, between Feltham and Hounslow stations. The location of the new depot is on the site of the historic Feltham Marshalling Yard which was a large yard in operation between 1918 and 1969.

The depot is used to stable the new fleet of 10-car Class 701 trains, with a maximum capacity of 100 cars distributed as 10 lots of 10-car trains in 10 siding roads. The depot features AVIS, CET and carriage washing facilities.

Feltham Depot is connected from the mainline by a new “Up/Down Arrivals” through loop which shall be constructed off the Down Main, around the 14 ½ MP. The existing mainline interlocking, Feltham RRI, was altered and a new interlocking, Harlington Road RRI, controlled from Feltham ASC.

Howdon Depot is a new rolling stock depot on the Tyne and Wear Metro in the city of Newcastle between Percy Main Metro Station and Howdon Metro Station.

The depot has been built as a temporary measure to enable the building of a brand-new depot at Gosforth. The existing Gosforth depot will be replaced over a number of stages, so therefore the Howdon temporary depot is designed to stable, inspect and clean a minimum of ten 65m long trains of the new fleet of EMUs and existing Class 599 Metro Cars.

Each is driven by 1500Vdc OLE traction supply. The depot also includes a workshop facility which shall be protected by a Depot Personnel Protection System (DPPS). The principal contractor, Buckingham Group Contracting Ltd. (BGCL) were requested to employ Fenix to complete the works as described below.

Both projects included the reinstatement and re-tamping of the tracks before reopening to rail traffic.

Fenix was responsible for initial survey of the impacted S&T cable routes and trackside equipment; powering down and making safe signalling equipment prior to the works; the subsequent support and protection during the works; and the reinstatement of the signalling system upon completion.

Fenix’s S&T staff worked in collaboration with the multi-disciplinary team throughout the works, assisting with the detailed planning to ensure there was minimal disruption to the railway network.

This required quick thinking and proactive action on site by the Fenix signalling team to resolve a number of technical issues that arose during the works.

The upgrade was made necessary by OFCOM’s decision to reallocate the operating frequency in this region for digital TV throughout Europe. The project, commissioned by Network Rail and led by Telent (telecoms services), required changes to be made to the frequency of the base stations. However, the wider implications included the development, modification and renewal of depot, engineering and trackside equipment to provide a fully operational communications system.

Fenix Signalling was responsible for all the signalling and testing works in the project. The company initially completed trials at two sites. Subsequently, work was completed at 19 sites on the West Highlands Line, totalling 165 miles. This included modifications to the TPWS (Train Protection Warning System) power supplies to enable the change of frequency.

Various challenges needed to be overcome along the way. Many of the locations were extremely inaccessible, requiring a journey of around five hours in a 4×4 between each and the winter weather conditions contributed further to these difficulties.

Success of the first phase of the project was thanks to the close collaboration between the signalling and telecommunications disciplines, and the teams at Fenix and Telent worked very effectively to achieve this.

2016 will see the Far North Lines, totalling 230 miles, upgraded for the frequency change and the interlocking at Inverness upgraded.

Projects are growing in scale and cost; the challenge for principal contractors increases in direct relation to the complexity and number of engineering disciplines involved.

A leading tier 1 civils framework contractor identified “lack of signalling knowledge” as a recurring issue within their business during post-project lessons-learned workshops, when programme delivery challenges were discussed.

The Fenix team is well aware that the signalling aspects of infrastructure projects can be overlooked – a project can often succeed or fail when this happens and “simple” issues (simple, that is, to a person not from a signalling background) are not given the consideration or focus required.

Fenix tailored a one-day workshop for a client’s inter-disciplinary contract, commercial and project staff to address this knowledge gap. The training introduced the basics of signalling engineering and the “crossing points” when delivering a major rail infrastructure project.

There is a message here that, unlike many other engineering disciplines, rail signalling cannot be quantified, segregated or packaged as an isolated project element – it is complex and interacts throughout all stages of the programme.

The feedback was expected, but welcome. The client’s staff realised it was essential to build their basic knowledge and be able to recognise the wider impact and consequences when a project brief does not take an all-round view of possible “crossing points”. With this in mind, the client has booked additional workshops for key project staff.

Fenix’s bespoke training course can be delivered either at the client’s site or at Fenix’s headquarters near Stratford upon Avon. Call for information on “Signalling for Non-Signalling Engineers”.

Over the last year and a half, the Fenix Team – led by Managing Director Craig Purcell – has developed a successful relationship with its suppliers, who provide depot control systems.

Engineers from Fenix’s Warwickshire base received specialist training in the application of depot control system products. Since then, Fenix has applied this technology in projects such as Banbury light maintenance depot. The project required an innovative and cost-effective solution to control the safety and automate the track system in guided traffic. Fenix delivered the GRIP 4-8 works at Banbury, starting in August 2016 and commissioned in late April 2017. Due to a compressed time schedule, the team worked under pressure throughout and the success of the project is testament both to the great team working and the preparatory work with supply chain partners.

The project at Banbury incudes an industry first – the first time a technical interface to the main line signalling system has been provided, which is done via volts-free relay contacts. It has the potential to be a standard interface between electronic (SSI) depot and mainline signalling systems. This has paved the way for more collaborative projects between Fenix Signalling and its partners. They have since worked together on a project for Taylor Woodrow, the civil engineering division of VINCI Construction UK, at Manningtree in Essex.

This project highlights the agility of Fenix Signalling in being able to react quickly and provide a successful solution within stringent tight timescales.

We were called in by Carillion and MPI at short notice to provide a design for the M73/M74 Motorway Improvement Project (Railway Interface Works) in Scotland. Within a very demanding time frame, the team from Fenix Signalling managed to obtain source records – identifying and resolving a number of deficiencies within them – in order to produce and issue the design to the site installation and testing teams, enabling the works to be successfully commissioned.

The success of the project was down to the flexibility and hard work of the design team, which had to work overtime in order to meet the deadline. 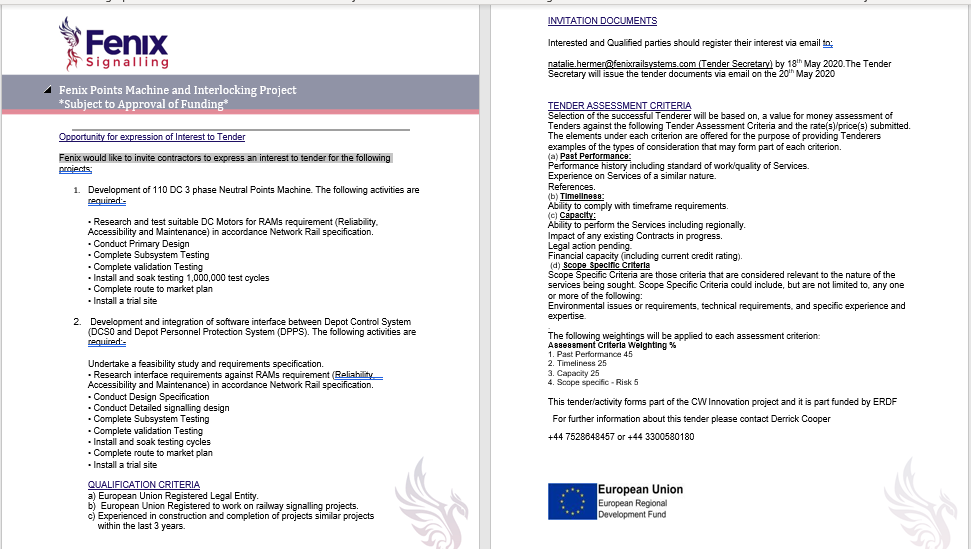 To view this document in Microsoft Word, click here: Fenix-Signalling-Projects-brandedV4